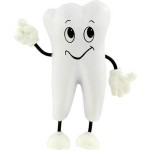 In the last twenty years I have lost five teeth. The symptoms were always the same. Inflammed and receeding gums, eventually the tooth becomes loose, and a loose tooth is sensitive and painful when chewing. Finally, no way to save it, and it needs to be pulled.

I was on my way to loosing all my teeth, at the rate of about one tooth every two years. But starting about ten years ago, I was able to stop my tooth loss, and I have not lost another tooth since. This post is about what I have learned.

As an engineer, I am a trained problem solver. It’s what I do: solve problems. I asked each dentist I visited why this was happening, and not one even came close to the true cause. All they could tell me was gingivitis, plaque, etc., etc., etc. Yes it’s true, I had gingivitis. Yes it’s true, I had bacteria. But I wanted to know the ROOT CAUSE, and no one could tell me.

Many people have these same symptoms, and following their dentist’s recommendations, and not knowing what else to do about it, just endure it until the inevitable conclusion: lose the tooth.

Reviewing dozens of YouTube videos, there is still a remarkable lack of knowledge about what I found to be the true cause of my gingivitis: simple nutritional deficiency. For example, here is a YouTube video, producted by a periodontal implant company (you would think they would be quite informed), with 640,000 views, and they completely miss one of the most likely true causes of gingivitis. Here is a video and screenshot of the video at 1:30:

Note the area highlighted in the yellow circle of this screenshot. The video says that this is gingivitis, and you can discuss treatment options with your dentist, and proper home care. And this is a prefect example of what I have experienced. There is no mention of nutrional causes or remedies. I have viewed dozens of YouTube videos, and none that are produced by dentists mention nutrition as a possible cause of gingivitis.

And that’s a real shame, because this screenshot is a good example of low level scurvy, a gum disease that is caused by a lack of Vitamin C, and so easily prevented. The red inflamed area in this screenshot is NOT caused by poor oral hygene. Scurvy was first documented as a disease by Hippocrates. The cure for scurvy was repeatedly discovered and forgotten over the centuries. In this day and age it is totally unacceptable for a dentist to not be able to recognize scurvy.

From the Wikipedia page on scurvy, I pasted this photo of advanced scurvy. Note the inflamed triangular areas between the teeth. This is a classic symptom of scurvy. The video above calls this gingivitis. 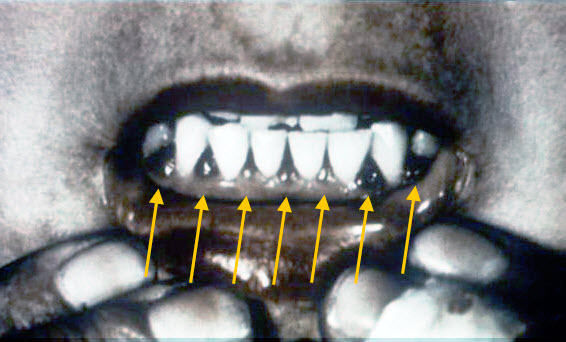 My condition was never as bad as this photo from Wikipedia, but I had low level scurvy for many years, and didn’t even know what it was. The areas between my teeth were sometimes red and swollen, and sensitive to a toothpick. Sadly, no one was able to make this simple diagnosis. It was very disappointing to realize that I lost five teeth unnecessarily, and all I needed to do to prevent it was take some Vitamin C.

I would go so far as to say that any dentist that does not consider nutritional deficiency as one possible cause for gingivitis is either uninformed or dishonest. If the 17th century sailors brushed, and flossed, and scraped, they STILL would have lost their teeth, because their problem had a NUTRITIONAL cause, and must be addressed with a nutritional remedy. Until they got the nutrition right, there was no chance to save their teeth. Why dentists don’t explain this simple thing I cannot understand.

In the last 10 years, I take about 4-5 grams of Vitamin C every day. I also drink a lot of sour juices, like unsweetened passion fruit juice, and grapefruit juice.

There is one other thing that I have been doing to address the bacterial issue. I have been using iodine as an antiseptic mouthwash. It’s important to not swallow this mouth rinse or you might be getting too much iodine. I have completely stopped my tooth loss, and it even feels like the gaps between my teeth at the gum line are closing. Some people use salt, or baking soda, or other herbal mixtures, but I wanted to mention that it is probably important to address the bacterial aspect of gingivitis as well.

Anyone who has had a loose tooth pulled will understand what I have said. If your gums look like the screenshot above, then good brushing, and flossing, and dentist visits, will NOT be enough to save your teeth. Find a dentist who is willing to discuss nutrition, and run from those that won’t.

There have been studies which suggest that ingesting dehydroascorbic acid specifically can speed up the beneficial health effects of this vitamin, because DHA is able to be quickly transported to the brain and mitochondria via glucose transporters. The transport of dehydroascorbic acid is much more efficient for the human body than transporting Vitamin C. Vitamin C is not as easily absorbed and requires more energy to mobilize.

Here is a video which explains this, and also how to make a “Green Smoothie” with high DHAA by yourself with common ingredients:

So if you’ve got gigivitis or periodontal disease, sure, of course, follow your dentist’s advice, and give Vitamin C a try, in either the L-Ascorbic acid or DHAA forms, and let me know later in the comments below.