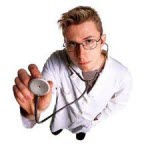 Warning: This post will radically alter your perceptions of the on-going NDT vs. Synthetics debate.

A short time ago, we received this very credible, and very disturbing message from a concerned customer:

“Peter,
I have a question about the Thiroyd I received from the order below…
To make a long story shorter there is a discussion on a closed Facebook group about whether certain overseas products actually have any T3/T4 in them. Since I am a bio-analytical chemist and work daily with mass spectrometry I decided to test my Cynomel, Cynoplus, and Thiroyd. I extracted each tablet with methanol and diluted and injected on an LC/MS system. The levels were as expected in Cynomel and Cynoplus but I did not even see a trace of T3 or T4 in Thiroyd.
Can you explain this?
Thanks”

No, I couldn’t explain it. And no information readily available on the net could explain it either. And the implications about the genuineness of our product were disturbing. In this customer’s test results, synthetic products had lots of free hormones, and our NDT had none. And so began an investigation which has the potential to turn the conventional thinking and ongoing debate about NDT vs. synthetics on its head.

This customer sent more details on his test method and results:

After a short time, we received this message from our customer:

“I need to step back from my claim about the Thiroyd. After further study and consultation with an endocrinologist I learned that there should not be any free T3 or T4 in a thyroid extract. The T3/T4 should be bound to thyroglobulin. It’s only through digestion that the T3/T4 is released. I am researching on how to properly quantitate T3/T4 in extracts.”

Now this is a remarkable statement! It means that there is NO free T3/T4 in NDT. And in synthetics there is ONLY free T3/T4. This makes NDT fundamentally and completely different from synthetic hormones. We see lots of people saying that NDT and synthetic are bio-identical, but (at the time of this writing) we don’t see anyone saying what we have just told you!

After some research on the subject, he added a digestion step to the procedure which would serve to break the bond and release the T3/T4 from the thyroglobulin. The first attempt resulted in improved but still unsatisfactory test results, but at least we were headed in the right direction.

“You will be happy to know that my Thiroyd tablets are good! I am very sorry for the mistake, I was not familiar enough with the biology. I usually rely on other people to explain the biology to me and then I design the analytical methods.

So the original problem was that I was looking for free T3/T4. For synthetic products like Cynoplus and Cynomel my method works great. When I applied this method to thyroid extracts it did not work. Since T3/T4 are covalently bound inside of a very large protein – thyroglobulin – I could not detect them. An endocrinologist gave me some advice and along with a literature search I was able to find a method. I used enzymes to digest the thyroglobulin and release the T3/T4 – this is exactly what happens when we take thyroid extracts orally.

I do not have analytical standards or T3/T4, but when i compare today’s data with that which I collected a few days ago for Cynoplus I feel confident that the levels of T3/T4 are in the range that is advertised (9mcg/38mcg).

I will do this analysis again when I get samples (Cynomel, Thiroyd, Thyroid-S) from a member of the closed Facebook group. I will then repeat it again when your samples come.”

This customer repeated the tests when he received the Thyroid-S samples which we had sent him, and there was still a clear anomaly where the results of the Thyroid-S were about half of the results of the Thiroyd. My feeling, and just based on nothing but personal experience of using these tablets, was the test method was still not completely releasing all the hormones for correct measurement. After further research and investigation and improved test method, we received this message from our customer:

“Here is your data…
Since the data for Thyroid-S was not encouraging last time I did a little extra work to sort this out. There are 2 sets of data.
The first, Digestion Only, is what I did last time. Digestion, dilute and analyze. It worked fine for Thiroyd, but did not work as well for Thyroid-S. Just like last time.The second, is a methanol extraction of the digest. Digest, extraction, dilute and analyze. This worked great for Thiroyd and ThyroidS. There must be something in the Thyroid-S tablet that is holding onto the T3/T4. The methanol was needed to set it free.The reported concentrations are in relation to a single pill of Cynoplus, so the data must be taken in context.Overall I think you can be happy with both of your products.”

We were obviously relieved with these latest test results, because it showed that our product was good. But, more importantly, it also opens myriad possibilities as to why these different compounds seem to work differently for many people. The synthetic (which is free and exposed raw hormone) might be affected by stomach acids in different ways in different people. Low acid, high acid, various digestive and pancreatic enzymes in varying amounts, bacteria/flora in the stomach and small intestine, all kinds of possibilities here which would vary by the person.

We know that most of the circulating thyroid hormones in human blood is NOT in fact free, but actually bound to Thyroxine Binding Globulin (TBG). In human blood, only 0.05% of T4, and 0.5% of T3 are free (see Reference 1). Thyroglobulin is a large and fantastically complex folded protein molecule whose shape differs markedly from spherical, the building blocks of which are long chains of peptides and amino acids. Perhaps the thyroglobulin in NDT (and completely missing in the synthetics) is absorbed, or necessary, or utilized, or forms other products during digestion that could affect blood levels of various substances, numerous carrier proteins for example, thereby affecting the results obtained.

The key point is: we know that many people appear to respond a lot better to NDT than synthetic hormones. The testimonials are everywhere. The question is: Why? So either it is all in their heads, OR, there is something else going on. This discovery presents a whole galaxy of new possibilities. The drug companies tell us the hormones are bio-identical. In the strict sense, after digestion, this is true. But, in simple terms, it is like saying starch is the same as sugar! Now a starch molecule contains sugar, and digestion of a starch molecule yields sugar, but starch is NOT the same as sugar! They have completely different chemical properties, and they will be absorbed in completely different ways by the body. And anyone that tells you they are the same is either hopelessly misinformed, or lying. Please note that this is a simple analogy; the thyroglobulin molecule is far more complex that a simple starch molecule.

To graphically illustrate the huge differences between Natural Desiccated Thyroid as compared to T4 Only Synthetics, please consider this graphic. It attempts to show the tiny T4, T3, T2, T1 and Calcitonin hormones tightly bound to the very large thyroglobulin molecules as found in Natural Desiccated Thyroid. Remember that the Thyroglobulin molecule is approximately 1,000 TIMES BIGGER than the T4 molecule. Then it also shows the tiny T4 molecules as found in synthetic T4 only products. The pharmaceutical companies would have us believe these are bio-identical. We will let you decide. 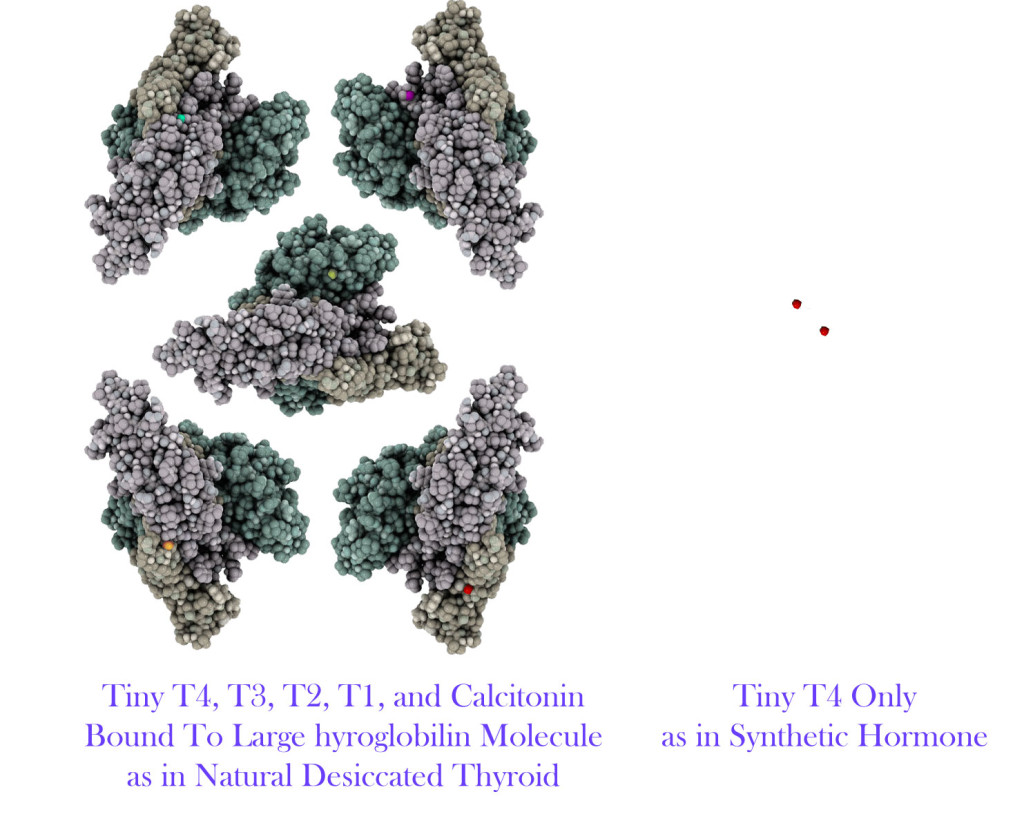 This could also explain why NDT seems to be more stable than synthetic hormones. The NDT hormones are bound to thyroglobulin and not available for reaction or breakdown until after they are first digested. This would be a potentially more stable compound.

There may be additional advantages to using NDT that are over and above what has already been discussed above concerning thyroglobulin content. There are THREE other hormones in NDT in addition to T4 and T3 that no one ever talks about. These are: T2, T1, and Calcitonin. Many endocrinologists believe there is little (or no) information about these other thyroid hormones 3, 5-diiodo-l-thyronine (T2) and monoiodothyronine (T1). This is not the case. Many studies have shown the T2 is biologically active and does not suppress TSH to the same extent that T3 does. Please see Reference 2 for much more info on this. Calcitonin is believed to help regulate calcium levels in the body.

These are just some of the many possibilities. We are not doctors or researchers and we are by no means the right person to investigate this. But I think that saying the thyroglobulin is broken down during digestion, and so therefore it is the same as synthetic, is far too simplistic. There is something going on here which could explain some of the mysteries of why NDT seems to work better for many people.

Ladies and Gentlemen, one thing is apparent: NDT and synthetic are NOT the same. They are fundamentally different compounds with different properties, and they will be absorbed in completely different ways by the body! The rhetoric coming from the drug companies is just that: rhetoric. Synthetic and NDT are NOT the same. All this talk about them being bio-identical is NONSENSE.

We wish to thank our customer, the “Mystery Alchemist”, who wishes to remain anonymous, for his ability to remain calm and focused and work through the issues, and his significant help in this analysis and discovery.

Natural Desiccated Thyroid and synthetic hormones are NOT the same! And don’t let anyone tell you otherwise!

In humans approximately 99.95% of T4 and 99.5% of T3 are bound and the rest circulate freely. The exact amount of free moving hormones depends on several physiological parameters. Most of these parameters result in a change in the concentration of carrier proteins, such as the effect of Es.

The main proteins carrying TH are: Thyroid Binding Globulin (TBG), which has a high affinity for T4 and can also carry T3. Although only about 25% of the circulating TBG is carrying thyroid hormones, TBG is responsible for transporting 75% of the total T4 and 80% of all T3. Albumin, carry loosely attached about 12% of T4, and 10% of the T3. Thyroxin-binding prealbumin (TBPA), also named transthyretin (TTH), transport 10% of T4 and 5% of T3 and, finally, lipoproteins that carry 3% of the T4 and 5% of the T3 have an intermediate carrying capacity (Fig. 15-12).

The Thyroid Patient Advocacy-UK (TPA-UK) Response to: “A Statement from the British Thyroid Association Executive Committee on Armour® Thyroid” – March 2008